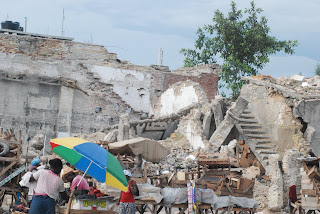 By Wadner Pierre
The January 12 remains and will remain the darkness day in the history Haitian people. Many reasons make this date important and unforgettable for Haitian people. Even before the earthquake the masses in Haiti had barely received the attention from most of the people saying that they are there to help this desperate population.  However, after the quake it seems to become clearer than before that the working-class and poor people in Haiti will continue to live in their extreme poverty, though the millions of dollars and the tons of humanitarian aid that have been pouring to this country since and before the earthquake hit and destroyed the country’s most important part, western department, the capital and its surroundings.

Haitian people have been discriminated and victimized of prejudice for more than two centuries. Until 1990 when Haitian people first elected their democratic government, there were two different birth certificates in the country, one “Paysan” or the peasants for those who live in the countryside, and another one “Citadin” for those who live in the cities. For example, on top of my birth certificate is written the word paysan.
At the UN compounds at the  Toussaint Louverture International Airport, where all humanitarian aid is being stuck since after the earthquake, the first thing that someone will hear from the United Nations representatives about the distribution of aid is, “This areas is a risky areas, and that area is a more peaceful and secure area.” Meanwhile, the people so called dangerous people have been camping next to the UN compounds since after the quake under their makeshift tents, and without the basic services that they normally deserve as displaced people. Just before the humanitarian workers meet people in the camps like Champ de Mars, Bel Air, Cite Soleil, Carefour they already made their own judgment which is people living in the areas above are dangerous, or label them as criminals or gang members.
When I was in Haiti, I heard that some private schools like catholic schools mostly frequented by the bourgeoisie and middle-class students will soon reopen their doors. When I asked a young high school student in the area where I grew up about his coming back to school, he was not even sure that it will come back to school next year because he went to public high school.
Another example is Haitian doctor I met couple of months before the earthquake hit the country. We were helping our friend who works for United Nations. I saw her inside the UN compounds, she was so happy to see me as well as I was. I told her I am not happy with the way that the UN tries to help our people. I made clear for her that the country does not need that many US and Canadian troops, but the country needs doctors, nurses and engineers who can help provide immediate care to the displaced population and rebuild back better the infrastructures of the country. She was astonished to hear that from me. She said that she could not imagine a person like me would say that. I asked her why. She told that I am in position to understand that the actual situation needs a military presence, particularly at the hospitals where the foreigners are working.
It may need to point out that the books proving by the Non-governmental Organizations like Red cross to serve as a guide for Haitians to build their tents if they luckily receive ones are written in English instead of in two languages, Creole and French spoken in the country. Perhaps, if there are some copies in French or Creole, I did not see them at the Cluster meeting area where they brief the media on their works done.
Finally, a friend of mine who lives in the mountains or where the rich people also live. She is a middle-class woman. She told me that she would like to have Marines everywhere in her area because she did not want bad people came where she lives. Whereas, in many places I visited including Cite Soleil, people sharing with each other their little food, a three or four people may share a bottle of water together. The discrimination of people in Haiti begins in Haiti with the elite class and the emerged class; we may call it the middle-class.
Furthermore, these people write in their walls in English, “We need help” as a message to those who are in position to help them. In the area where I grew up, there is a feeding program, called Saint Claire’s Rectory funded by a California-based non-profit that has been serving 1500 people a meal form Monday through Friday for ten years. The number of people who used to come to eat has doubled since after the quake, but they continue to serve them with their limited means without problems in term of security. From Independence to earthquake, the discrimination and prejudice against Haitian have not ceased.
Thus, due to the lack of leadership of the Haitian government, the Non-Governmental Organizations or NGOs continue to humiliate and discriminate the poor and respected Haitians citizens by assuming they are all dangerous, violent, or savage people, and they do not know anything, even how to put a tent up while ignoring the strength and courage of these people. As time goes on, the hope for a better Haiti is still alive in the heart of each Haitian whether they are rich or poor. The courage of Haitian may be rare and unique one in this twenty first century.  As my friend Jean-Claudel Merisma said, “We are survivors, and we will never give up”

Posted by HaitiAnalysis at 10:07 AM

Get your products here and help